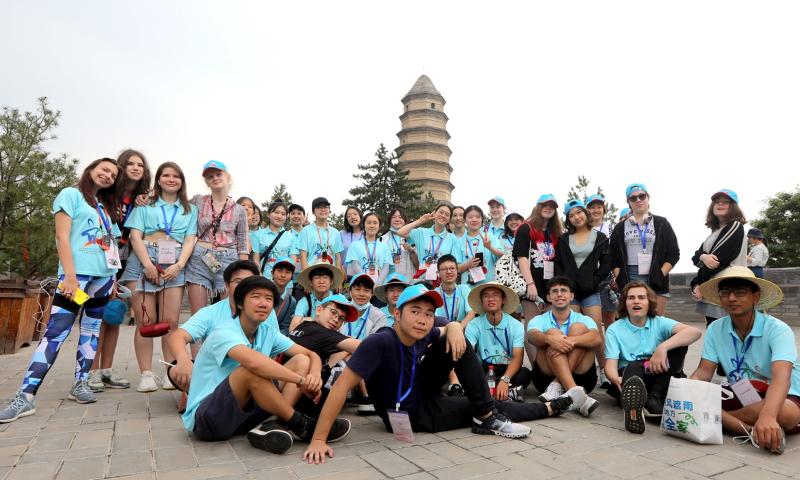 Foreign students have a group photo taken in front of the Baota Mountain. Photo: Chen Xia/GT

The country has also signed degree recognition agreements with 58 countries and regions, Liu Jin, director of the Department of International Cooperation and Exchanges of the Education Ministry, told a press conference on Tuesday.

According to Liu, China's education cooperation and exchanges with the world continued to deepen in the past decade.

A total of 23 Luban Workshops, a Chinese vocational skills training workshop program training talent overseas, have been established in order to enhance education cooperation and exchanges under the Belt and Road Initiative (BRI).

Jiang Haishan, the head of the International Education Association Shanghai, told the Global Times on Tuesday that the association has held summer youth camps with 43 international sister cities of Shanghai since 2009, and 1,428 Chinese and foreign teachers and students have participated in the camps.

The event has helped Shanghai and countries and regions along the BRI route to carry out exchanges involving educational culture and learn from each other, Jiang noted.

Enhanced cooperation in the past 10 years has helped to forge two-way communication between China and the world in education, Xiong Bingqi, director of the 21st Century Education Research Institute, told the Global Times on Tuesday.

In the past, China's education communication with the world was mainly one where the country sent talent and experts to advanced countries to learn cutting-edge knowledge and technologies. But now, China has become a major destination for international students, which indicates the development of the country's education sector, according to Xiong.

China was the third-biggest destination country for international students in 2020 following the UK and the US, according to a report by the Center for China and Globalization (CCG), a Chinese nongovernmental think tank based in Beijing, published in March 2021.

According to Liu, international students from 195 countries and regions studied in China during the 2020-21 academic year, with 76 percent of them pursuing academic degrees, 35 percentage points higher than in 2012.

With the improving educational environment and a dynamic employment market, more and more international students are choosing to come to China to study and work, and most overseas Chinese students choose to come back to China after graduating.

More than 80 percent of overseas Chinese students have chosen to return to China to work after graduating over the past decade. In turn, the Chinese government has opened a national employment platform to help these students find jobs, Liu said at the Tuesday press conference.

A more flexible market and more priority given to students from governments and companies - such as on-campus recruitment and government support for youth to start their own businesses - are the main reasons for Li, a Chinese student who is studying mathematics in the US, to decide to come back to China after graduation.

Another major consideration is the high living cost in the US, Li told the Global Times on Tuesday.

Some other students reached by the Global Times noted their aspiration to contribute to the building of the country.

"I have gained more professional knowledge and expanded my horizons. I think it is a responsibility for me to return to the motherland to make contributions in my professional field," Alan, a Chinese student who got a master's degree in sports management from the University of Edinburg, told the Global Times on Tuesday.

Chinese universities and institutes have actively conducted cooperation programs with international partners in the past decade to provide better platforms and opportunities to their students.

Liu noted at the Tuesday press conference that 65 percent of China-foreign partnership education programs and institutes that have been established over the past 10 years have focused on the fields of science, engineering, agriculture and medicine.

These programs and institutes made it possible for nearly 10,000 Chinese students, who had planned to go abroad, to study with foreign universities while remaining in China during the COVID-19 pandemic, Liu said.